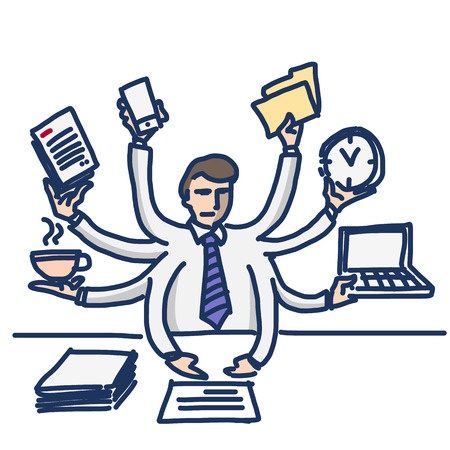 “To do two things at once is to do neither.” – Publilius Syrus

Although folk-wisdom for many years has been that doing many things at the same time is good way to tackle a number of tasks, it turns out that this is not true. Let’s look at the problem from both a philosophical (logic) and a scientific (psychology) viewpoint.

Logically, each time you switch between tasks, such as suddenly checking voice mail while in the middle of composing a short email, you lose a few seconds to a full minute, depending what is needed to get the materials together for the next activity. The obvious conclusion is that there is a time-cost every time you switch. After an eight hour day of ‘multitasking’ this adds up to wasted time.

The human brain is an amazing marvel and it can do many things in parallel. Yet, psychologists at The Brain, Cognition, and Action Laboratory at the University of Michigan have discovered that the higher functioning part of the brain that is involved in cognition, acting like a choreographer for thinking, perceiving, and acting, can only focus on one item at a time. Multitasking isn’t really doing 5 things simultaneously as it is often advertised. Instead, it just means that someone is toggling between tasks in succession before completing the prior task.

If you’d like to learn more about the research, I suggest the following paper: