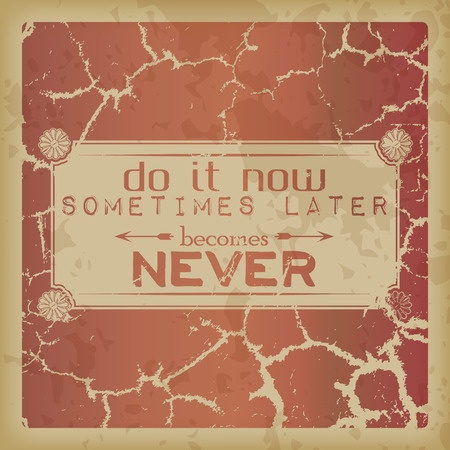 Many find etymology an enjoyable activity. I agree.

It also can be educational for two reasons. First, it gives a fascinating glimpse into the evolution of language, as it illuminates the origin, history and (sometimes) shifting meaning of certain words, as most have long and distinguished lineages. Second, understanding words can also, on occasion, help one examine one’s own habits.

For example, let us take the word procrastinate. Although a common English word, it does not have an Anglo-Saxon heritage. Instead, this comes directly from the Latin verb procrastinare meaning to “hold off until tomorrow.” Of course, this is a combination of pro- meaning “for” + crastinus meaning “of tomorrow” (from cras meaning “tomorrow”). Therefore, a procrastinator is someone who is “for tomorrow” and this is a behavior, a choice, which anyone who strives to be productive should avoid.

Two words in Latin that are synonymous with the English word ‘now’ are modo and nunc, so perhaps we should all consider choosing to be promodo or pronunc, so we can focus on being “or now” or “for the present moment”.

There is another Latin phrase that captures the same meaning: carpe diem (literally, to pluck the day). The Roman poet Quintus Horatius Flaccus made this succinct motto famous; however, the entire phrase is carpe diem, quam minimum credula postero meaning “seize the day, putting as little faith in tomorrow as possible”. I encourage everyone to be promodo. Live for the present; do it now!